Cookies are one of the handiest and easiest foods to have around. It goes with almost everything in the world—and every household has this one box of heaven. I love baking cookies—not merely following the cook books, but experimenting with new ways of pleasing my palate. The good thing about cookies is that everybody likes them and they last a long time.

My personal favourites are chocolate cookies and peanut butter cookies. When done right, these are like a bomb of chocolate exploding in your mouth and giving you a food-gasm. You can read the recipe here.

Upon further research about what I eat and where it comes from, I realised that particular foods usually come into existence out of necessity and not necessarily as a choice or luxury.This list include cookies too.

The book Cookies and Crackers written in 1982 traces and provides us the story of cookies. The art of making cookies were first discovered by Neolithic farmers around 10,000 years ago. The book mentions savoury crackers as the practical convenience food, easy to carry and long-lasting. Farmers made a paste made of grain and water, and baked this paste on hot stones. They baked this paste not once, but twice, to dry the ingredients properly and thoroughly in order to increase its shelf-life. This was a perfect food for travelling.

This quality made them the essential commodity on ships in later years—no ship ever sailed from a port without this durable, dry form of sustenance on board.

This method of making cookies also gave it its original name—the biscuit.The word comes from the Latin word biscoctum, which became the French word biscuit which means, “twice-baked” or “twice-cooked.”

The biscuit travelled to the middle-east in 7th century AD and early Persians (now Iran) introduced sweetness to it, making it the snack we eat now. (Thank you Persians, I like it sweet). They made the batter lighter by adding eggs, butter and cream and sweetened it with fruit and honey. These little baked cookies became famous in Persia and spread all over Northern Europe. They became a staple in Northern Europe in no time, and got the name cookies, distinguishing the small confections from the larger cakes. This new name came from the Dutch Koeptje [koekje], meaning small cake. 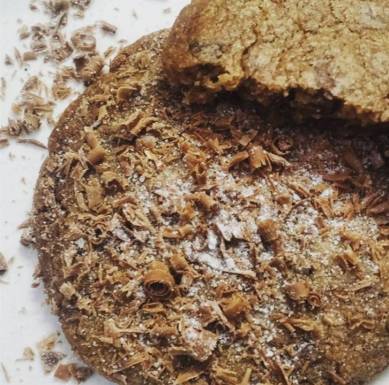 Another interesting story about cookies comes from the Roman Chef Apicius. He boiled and dried the thick paste of wheat flour and spread it out on a plate. He then sliced and fried the dry, hard batter until crisp, and served it with honey and pepper. This recipe was modified and experimented with a lot. Another Roman mixture consisted of flour, water, sugar, and spices, which was cut into pieces and fried.

Alan Davidson’s The Oxford Companion to Food  mentions that the cookies we eat today, made from creaming butter and sugar together, probably didn’t come on the scene until the 18th century. In the 19th century, the price of sugar and flour dropped, and chemical agents like baking soda became available which led to further experiments. Coating cookies with chocolate became popular only after World War II.

Cookies have seen the world and been assimilated into a lot of cultures and traditions. Since now we know the stories behind one of our favourite snacks, let’s break out our baking gear. You can follow my recipes for a heavenly cookie-eating experience.

This was originally published on Food And Streets By Sadaf.

This site uses Akismet to reduce spam. Learn how your comment data is processed.